Cooper Spur Wild & Free Coalition first came together in 2002 to fight Mt. Hood Meadows’ plans to develop a sprawling destination resort on the slopes of Mt. Hood near Cooper Spur. 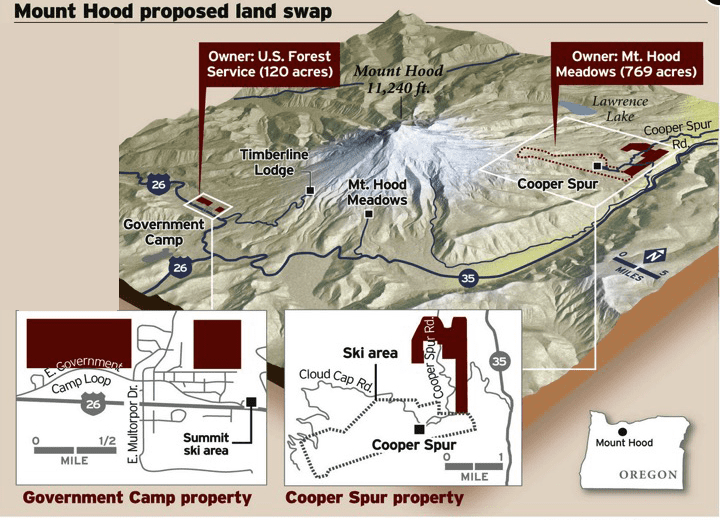 Dubbed the “Clean Sweep,” the deal called for Mt. Hood Meadows to give up its 770 acres on the north side of the mountain in exchange for 120 acres of developable land in Government Camp owned by the US Forest Service. Meadows’ would then be able to develop the land at Government Camp while their holdings at Cooper Spur would become part of the Mt. Hood National Forest. If completed, the trade will also create a new Wilderness area of thousands of pristine backcountry acres around the historic Tilly Jane trail and protect Hood River’s drinking water in the Crystal Springs Watershed.

The deal was mandated by an Act of Congress in 2009 but has yet to be completed. The most recent hang up is over faulty appraisals of the trade properties which overvalue Meadows’ land and undervalue the land owned by the public at Government Camp. Under the flawed appraisals Meadows is attempting to bypass the “Clean Sweep” and instead keep substantial holdings at Cooper Spur which would allow it to take another run at destination resort development, an outcome that would undermine the very purpose of the land trade and not provide full value to the American public for the land it owns at Government Camp.