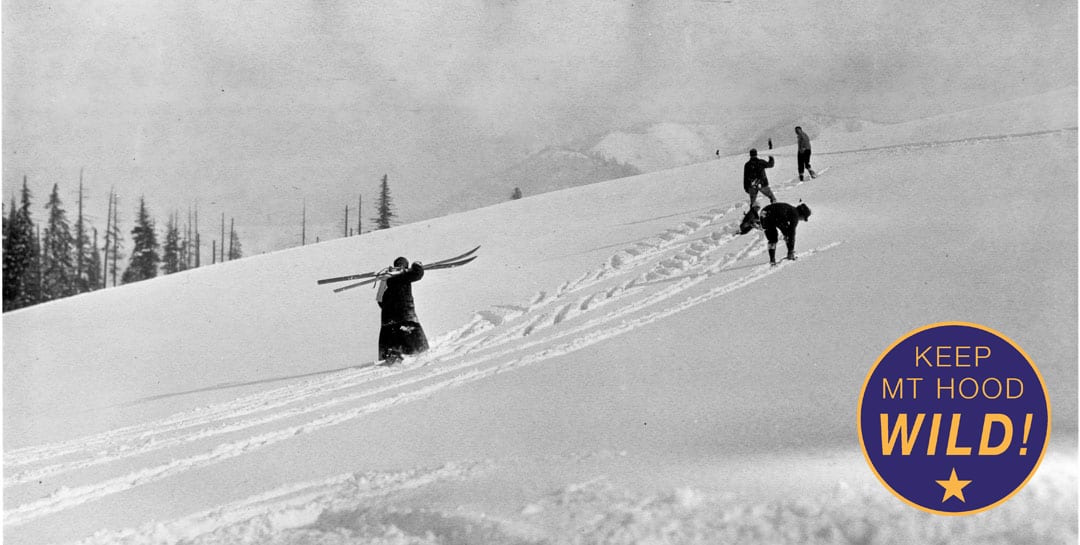 All About the Tilly Jane and Cloud Cap Historical Areas

The north side of Mt. Hood is home to many of the oldest structures on the mountain.  The Cloud Cap Inn was listed in the National Register of Historic Places in 1981 for its importance as the country’s oldest high alpine lodge and for its architecture. Development began with the building of Cooper’s Tent Camp and the Wagon Road in 1885. Back then, visitors from Portland would take a train to Parkdale, then transfer to a horse drawn wagon for the arduous trip up the mountain. The early development of this area is a story of the grit, sense of adventure and love of the mountain by Oregon’s early settlers.

The Tilly Jane Cabins are still a favorite destination for today’s outdoors minded folks. “You can still have an experience very similar to the early mountain pioneers”, said Andre Fortin, the current volunteer cabin caretaker. Most folks park in at the winter snow park and hike up and spend a night or two at the cabins in winter months. In summer, you can drive to within a ¼ mile of the cabins and hike your gear over from the Tilly Jane campground parking lot. The A-Frame is rustic with no running water or electricity. There are many trails to explore both in summer and winter and it’s always fun to climb up to the stone hut when the weather allows.

The cabins are currently managed by the all-volunteer, Oregon Nordic Club and are available for public rental. Rentals are managed by Recreation.gov. To learn more about the cabins, please visit the ONC website.

Tilly Jane — where did the name originate? There is a Tilly Jane Creek and a Tilly Jane Camp. They where both named for Caroline Augusta Ames Elliott Ladd better known by her nickname “Tilly Jane”. Tilly Jane was the wife of real estate developer William Ladd, who in partnership with Colonel C.E.S. Wood, bought the Mt. Hood Trail and Wagon Road Co. in the Spring of 1889. She fell in love with the area, and at some point, it was named after her.

History of the Area

Prior to development by white settlers, the area was used by Native Americans to gather foodstuffs and hunt. The area saw it’s first development with Cooper’s tent camp and Wagon road between 1885-1889, culminating with the building of Cloud Cap Inn in the summer of 1889. In February 1890, Will and Doug Langille skied to the Inn on homemade skis. This trip was followed by many other successful winter trips and this early exploration enticed others to make the same journey. The area quickly became popular for backcountry enthusiasts who liked the challenge of making it up the mountain under their own resolve.

Summer access was via horse drawn stage up the 1889 wagon road which is mostly used for skiing today. In 1905 automobiles were able to make their way to the Cloud Cap Inn. In 1910 the Snowshoe Club Cabin was built for year-round use. The Snowshoe Club is just across the hilltop from the Cloud Cap Inn. Another spurt of growth came in the 1920’s with the addition of the American Legion Amphitheater and cook shed. The main access road that is still used today was built in 1926, followed by the Tilly Jane Campground and Guard Station in 1934. In 1939 the Tilly Jane Ski Warming Hut was built by the CCC. You can still use some of the original fire pits at the TJ Campground. One of the last areas to be developed was the Cloud Cap Shoulder Campground located just South of Cloud Cap Inn. 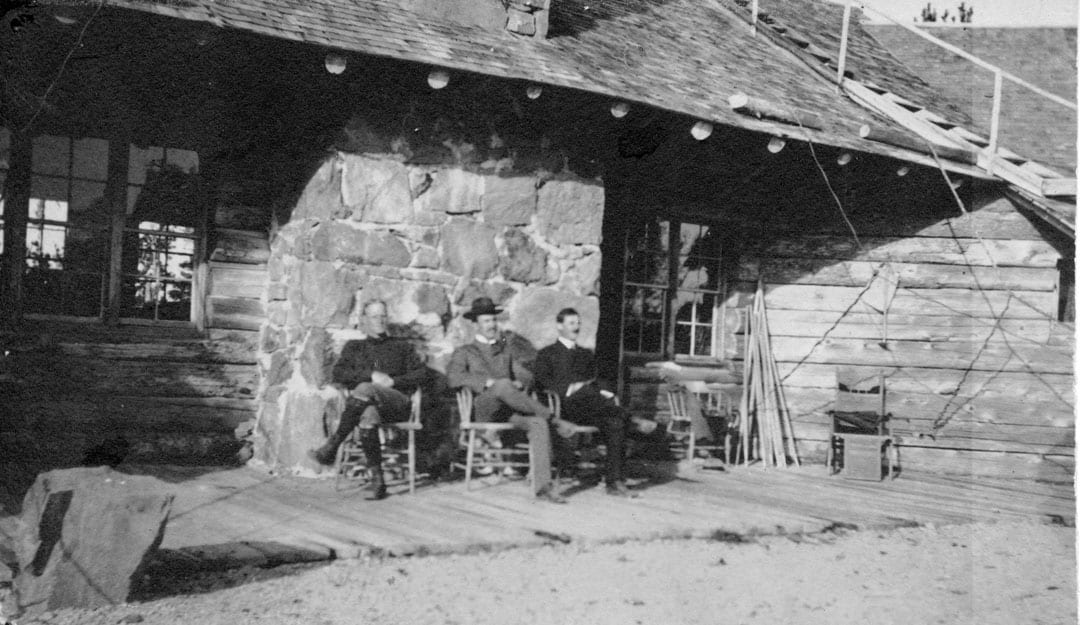 Built in 1889, the Cloud Cap Inn is the country’s oldest high alpine ski cabin. It was built on the site of the first “season long” public resort at timberline (1883), a tent camp hosted by Mrs. David Cooper, of the Cooper Family which gave its name to the distinctive ridge above the inn.

The inn, built at an elevation of 5837′, was constructed of amabilis fir, cut from a site about 2.5 miles below the inn and hauled up the mountain by teams of horses. William Marcy Widden, a Portland architect drew the plans.

To read of the building of the Cloud Cap is to come acquainted with the stories of people whose names delineate many of the features on Mt. Hood: Capt. Henry Coe and Oscar Stranahan, who with David Cooper led some of the first explorations on the north side of Mt. Hood, the engineer Newton Clark, Dr. and Mrs. Perry Barrett, avid hikers from Hood River, or the Elliott Brothers and others who discovered Lost Lake, or James Langille, who was the construction manager.

For additional information and pictures of Cloud Cap, visit Mt. Hood History. For interesting drawings of what Cloud Cap might have been, see Mountain Architecture, by Thomas Deering.

It is now operated and managed by the Crag Rats, America’s oldest Search and Rescue organization. 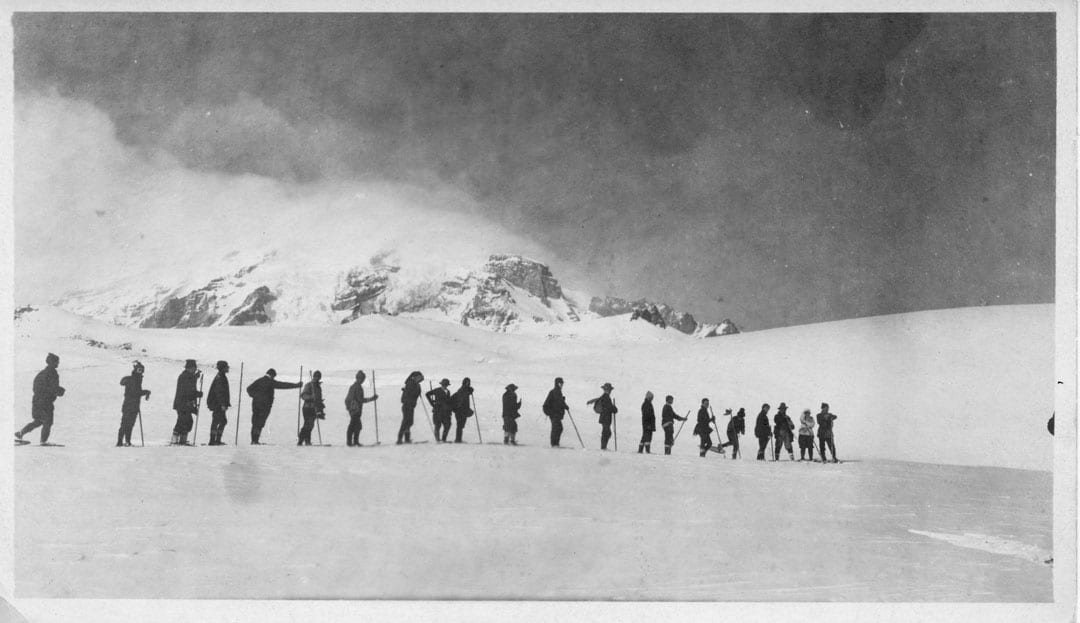 The Amphitheater and American Legion Cook Shed were constructed in the 1920s. The Tilly Jane Ski Trail was used by American Legion climbing groups in the 20s and it is very possible that it was also used earlier by Native Americans and early settlers in the Hood River Valley. High alpine meadows were often used by valley sheepherders and the Tilly Jane Ski Trail is dotted with open meadows that may have enticed them to make the trek.

The Tilly Jane Guard Station was built in 1934 and initially it received seasonal use for backcountry access and fire protection. The Ski Warming Hut (also know as the Tilly Jane Ski Cabin) was constructed by the Civilian Conservation Corps in the late 1930s.

The cabins are currently managed by the all-volunteer, Oregon Nordic Club and are available for public rental. Rentals are managed by Recreation.gov. To learn more about the cabins, please visit the ONC website.

In the winter of 1938-1939 Percy Bucklin, Bill Cochran, Harold Wells and Walter Applegren, members of the Crag Rats, marked a wider swath along the existing ski trail. In 1939 the Civilian Conservation Corps (CCC) cleared out the Tilly Jane Ski Trail. The building of the trail fit easily into the CCC program, readily available labor and a moderate budget for equipment. Single- and two-man falling saws and axes and wedges were used predominantly in the woods for falling trees and for limbing and bucking to clear the route. What earth moving may have been necessary would have been done by hand using pickaxes and shovels.

The Tilly Jane Ski Trail climbs 1900 vertical feet in 2.7 miles to reach the Recreation Area. The distance by Cloud Cap Road is far greater – about 10 miles. The trail climbs gently, without switchbacks, up a series of unique steps and flats to a broad ridge-top with a number of open parkland settings before it reaches the Cloud Cap/Tilly Jane Recreation Area.

The trail’s integrity is very high – it remains virtually unchanged since it was brushed out and widened in 1939. The sweeping, open vistas across Mt. Hood and nearby ridges and peaks are virtually the same as they were when past visitors experienced them. The old growth forest and open natural parkland on the ridge crest followed by the trail are intact except for the most visible feature – the clear cutting that was performed at the Cooper Spur Ski Area to create the 50-acre ski area. Other than that there are no visible areas along the trail cleared by human intervention. Instead, there is an overwhelming quiet and sense of peace that pervades the area. This sense of peace connects us with the early explorers who heard the same birds and saw the same flora and fauna without any mechanical intrusions or visibly altered landscapes. The Tilly Jane Ski Trail is directly and closely linked to the Cloud Cap Tilly Jane Historic Recreation Area which is already listed on the National Register of Historic Places. The trail deserves recognition as an historic important feature of the Cloud Cap Tilly Jane Historic Area on Mt. Hood. the trail should be included in the National Register as a piece of Oregon’s past, present and future for all generations to enjoy in its historic state.

What is know known as the Wagon Rd. Ski Trail follows the bed of the historic wagon road built in 1889 to provide wagon access to the Cloud Cap Inn. Prior to 1889, the road from Hood River stopped at the Toll Bridge on the Middle Fork of the Hood River.

The road was a difficult one to build — and a hard one to drive. Chinese laborers graded the road by hand, included an infamously steep 22% grade known as “China Fill” on a curve just below the inn. The grade was hard on horses at the end of the 6-hour drive up from Hood River. Early automobiles did not fare as well, often overheating and breaking down on the steep grade.

The Wagon Rd. Trail starts below Cloud Cap, and cuts down the mountain, intersecting the the Cloud Cap Rd. (#3512) in numerous places before connecting with Rd. 3511.